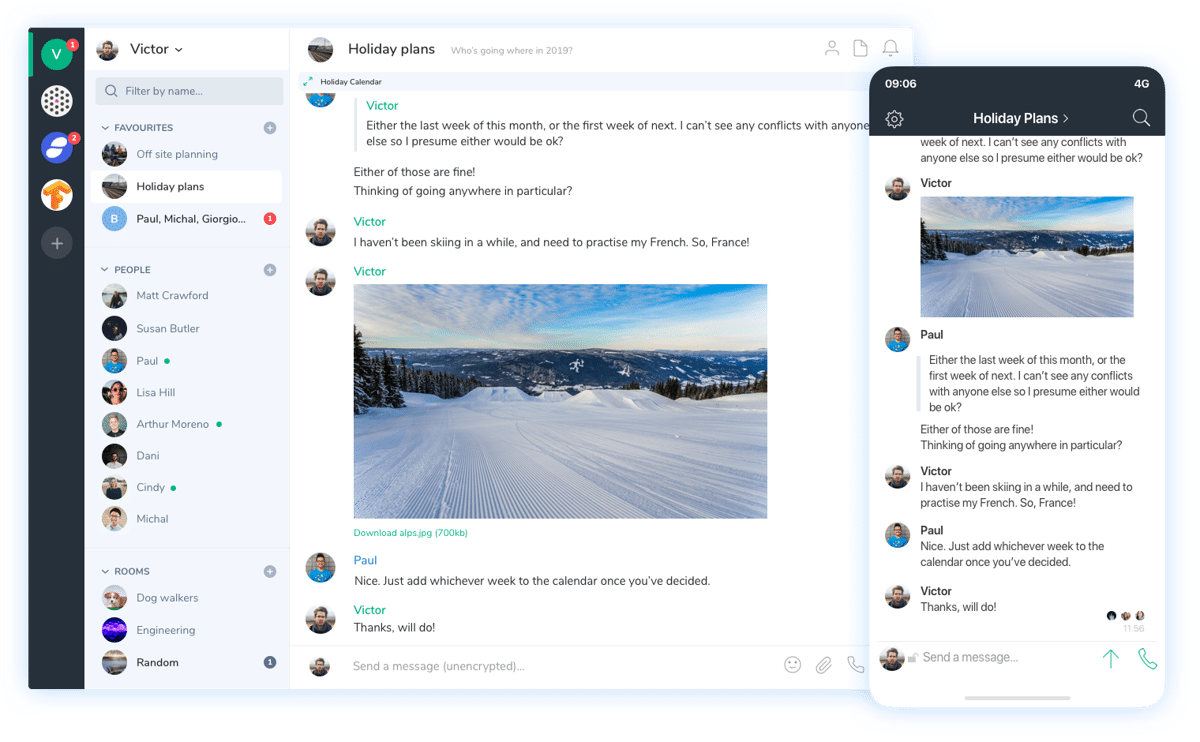 This is a chat client application for Gnu / Linux and other operating systems, it is completely open source, all code is posted on GitHub for anyone to view and expand on. This means teams can customize or contribute to the code so everyone can benefit from the speed of community innovation.

Riot is written using web technologies and the React framework, while the desktop version is based on the Electron platform.

In these new versions of Riot for different platforms, we can find a key improvement which is the inclusion of the default end-to-end encryption (E2EE) for all new private chats that are logged in by sending invitations.

To negotiate keys in chats with several participants, the Megolm extension is used, which is optimized to encrypt messages with a large number of recipients and allows a message to be decrypted multiple times. The ciphertext of the message can be stored on an untrustworthy server, but cannot be decrypted without session keys stored on the client side (each client has its own session key). Encrypting each message, based on the client’s session key, generates a key that authenticates the message in relation to the author.

The second major change is the activation of cross signature support, which allows the user to verify a new session from an already confirmed session. Previously, when connecting to the user’s chat from a new device, a warning was issued to other participants to avoid spying on whether the attacker had access to the victim’s account. Cross validation allows user to verify their other devices in the input and confirm the trust in the new login or determine that someone tried to connect without your knowledge.

To simplify the configuration of new logins, the opportunity to use QR codes is provided. Verification requests and results are now stored in history as directly sent messages.

Instead of a pop-up modal dialog, verification is now done in the sidebar. Among the related features, the Pantalaimon layer was also noted, which allows connecting to the encrypted chat of clients that do not support E2EE, as well as a client-side mechanism to search and index files in encrypted chat rooms.

Finally if you want to know more about it about the news that are included in this new version, you can check the details In the following link.

How to install Riot on Ubuntu and derivatives?

For those who are interested in being able to install this application on their system, they can do so by following the instructions we share below.

The first thing we have to do is open a terminal (you can use the Ctrl + Alt + T key recombination) and in it we are going to type the following command:

Now we are going to add the public key of the application with:

We add the repository to the system:

Y we proceed to install the application with the following command:

And that’s it, we can start using this application in our system.